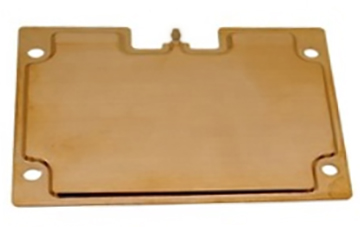 Vapor chamber heat sinks are designed for vastly improved thermal performance. As thermal management continues to be a greater challenge in today’s microelectronic designs, vapor chambers are often found to be the ideal solution.

With increased capacity, speed and power being placed into smaller and more compact form factors, designers are able to reduce weight and height while dealing with the increased power density. Vapor chambers are able to effectively cool to safe operating temperatures, which will extend the component life.

Baknor are able to deliver custom vapor chambers solutions in sizes and shapes specific to your application including single and multi-stepped vapor chamber bases.

A vapor chamber is very similar to a heat pipe. Heat pipes typically only transfer heat along the axis of the heat pipe. They allow heat to be able to be spread in a 360 planar ̊ direction, versus the single direction offered by heat pipes. Vapor chambers are typically limited to 50~200mm with a minimum thickness of 3mm.

A vapor chamber is typically integrated with heat sinks of either copper or aluminum material. Stamped fins can be soldered to the vapor chamber and accommodate various vapor chamber footprints. They can improve the thermal performance by as much as 30% over heatpipe based solutions.

Vapor chamber heat sinks, also use phase change cooling principles similar to heat pipes. They are filled with coolant that, when heated, change phases from a liquid to a gas and back again. A wick structure, sintered powder, mesh screens, and/or grooves, are applied to the inside walls of an enclosure planar shape. Liquid is added to the device and vacuum sealed at which point the wick distributes the liquid throughout the device. As heat is applied to one area, the liquid turns to vapor and moves to an area of lower pressure where it cools and returns to liquid form whereupon it moves back to the heat source by virtue of capillary action.

Start the conversation with our thermal design solution professionals, by using our thermal design check list, to analyze and solve your thermal challenges. Baknor’s experience and knowledge gained over the years in many different applications enables us to help you find the right innovative cooling solutions for your application.