We design the best heat dissipation solutions, specific to your application.

Results are the smallest, lightest, most cost effective solution.

Already have a design completed? Let us build to your drawings!

To Protect Your Electrical and Electronic Equipment

A reliable cooling system is critical in today’s electrical and electronic systems. With the amount of heat generated from various power components, too much heat in an enclosure can cause damage to sensitive equipment, potentially causing failure.

A heat exchanger is a device used to transfer thermal energy between two or more fluids, which are at different temperatures. In most cases, the fluids can exchange heat without direct contact. The most basic function is to remove heat from a specific location by turning the heat into a fluid. This fluid takes the heat and passes it to a second fluid without mixing or coming into direct contact. As the heat passes to the second fluid, the original fluid will now cool down as it travels back to the original point. The process then starts over again.

Air to Air or Liquid to Air.

It is important to point out that the fluids can be a gas, such as air, or can be a liquid such as water or dielectric fluids and they don’t have to be consistent.

Special Environmental Needs Can Include:

Fans and/or pumps are often used to keep these gases or liquid moving, as fans move gases and pumps moves liquid. Some applications can also benefit from increased heat transfers by adding heat pipes.

Designs Can Include Various: 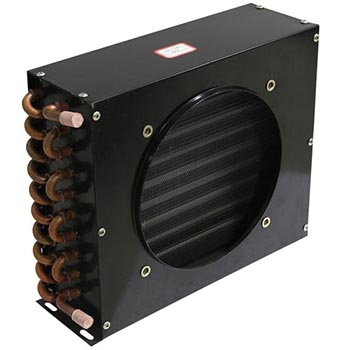 Air to air heat exchangers can be used to keep electrical components cool. They transfer thermal energy between two separate air streams. They allow two air streams to come into close contact with each other - close enough that the energy in one can be transferred to the other, but not so close that contaminants are also exchanged.

Today’s heat exchangers often use heat pipe technology to move heat from inside an enclosure to the outside air. With very low energy consumption there are no moving parts, which increases the overall reliability and reduces maintenance needs. The heat pipe transfers heat by using a phase-changing fluid that absorbs heat from the enclosure as a liquid, converts it to a vapor, and then releases the heat to the outside air. As it releases the heat, the liquid cools and moves back to its original starting point. This will continue to circulate while moving heat out of the enclosure.

- No thermostats required. -Transfers heat in one direction