We design the best heat dissipation solutions, specific to your application.

Results are the smallest, lightest, most cost effective solution.

Already have a design completed? Let us build to your drawings!

Graphene is a one-atom-thick layer of carbon atoms arranged in a hexagonal lattice. Often described as a single, thin layer of graphite — the soft, flaky material used in pencil lead. Graphene is a building block for graphite.

Graphene is one of the strongest materials in the known universe. With a tensile strength of 130 gigapascals, it is more than 100 times stronger than steel.

It’s unique properties includes its flexibility, transparency, high conductivity, and impermeable to most gases and liquids. Graphene is an excellent conductor of heat that makes it ideal for thermal management in electronic applications.

It is a sheet of carbon atoms in a honeycomb structure.

We have created a graphene film heat sink that combines carbon nano tubes, graphene, and diamond dust which enables it to work extremely well for thermal dissipation. The high polarizability of our nano materials enables them to spread evenly on the surface of our film, which maximizes the thermal radiation cooling effect.

Nano structure strengthens electrical insulation so that it can withstand voltage above 2kV. The thermal spreading layer has a high level of heat emission ability through infrared radiation and hence radiates heat well, even in a confined space. Depending upon your requirements, adding a metal layer beneath our film speeds up the heat emission to the nano structure layer, facilitating greater thermal radiation.

There are several layers that is optional:

-Such as graphene EMI layer, -Graphite layer, -And metal layer

Depending on the customer’s requirements, the metal layer can create a structure, such as shielding case with thermal management and heat sink function or chip package case.

Can be used in applications where weight reduction is critical.

Flexible and bendable, the heat spreader is capable of conforming to all uneven surfaces 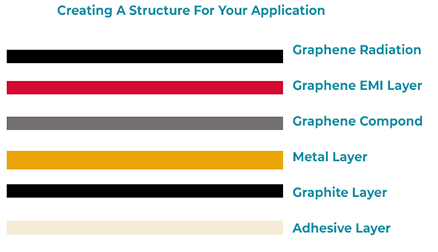 Below Are Some Recent Designs That Can

Be Purchased To Experiment With

Examples Of Some Recent Designs

It is a special designed heat sink plate, constructed with multi-layer graphene composite materials with high thermal radiation and high thermal conduction properties to be able

Is a special designed heat sink material. It is constructed by multi-layers of Graphene composite materials. This material has high thermal radiation and high thermal conduction properties. The added solderable layers are extremely effective in removing the excess heat from various devices. This product is especially suitable for any electronics design applications.